The American-born, Edmonton raised, entrepreneur who transformed the Denver Broncos into an NFL powerhouse, has died at the age of 75. 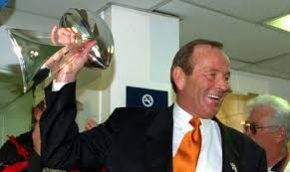 Pat Bowlen, who was born in Wisconsin and who grew up in Alberta, was the first owner in NFL history to have his team win 300 games, including playoffs, across three decades. Those victories included three Super Bowls. He was elected to the Pro Football Hall of Fame earlier this year.

Bowlen bought the Broncos in 1984 and aside from all the victories on the field, helped the NFL usher in billion-dollar TV deals.

A statement on the Bronco’s website says Bowlen died late last night surrounded by loved ones. No specific cause of death was given, although it’s understood he’d been suffering from Alzheimer’s for several years.