Andrew Scheer insists he is his “own” man. 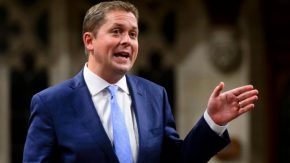 The federal Conservative leader is fighting back against attacks ads that ran during the Raptors game on Monday portraying him as a puppet of Ontario Premier Doug Ford.

Scheer says he’s different from the Ontario premier and has his own approach and his own policies. He goes on to say the difference in this federal election is going to be between himself and Justin Trudeau.

Scheer also says he’s not concerned about Ford’s declining popularly hurting his party in the October 21st election  and says he is very optimistic about the chances of winning a lot of seats back from the Liberals in Ontario.

It was the week before during a Raptors game, the Conservative Party ran ads to promote leader Andrew Scheer.

The Ford PCs at Queen’s Park have also been vocally opposed to the federal carbon tax with mandatory gas stickers set to go into effect August 30th. Gas station owners in Ontario who do not comply with the anti-carbon tax stickers will face fines of up to $10,000 dollars a day.