THE ROYAL YORK AT 90 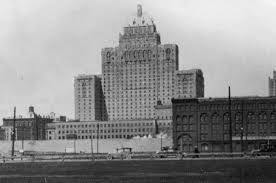 When it opened in 1929, The Royal York was the tallest building in the British Empire and the dominate structure on the Toronto skyline.

Architecturally, it is designed in the shape of the British throne.

Over the year’s the hotel has hosted just about every body who is anybody; from legendary entertainers and Royals including King George, Queen Elizabeth and Prince Harry.

Today’s celebrations include a ceremony to celebrate the opening of the hotel’s new lobby.