The minority owner of the Golden State Warriors who pushed Kyle Lowry and shouted obscenities at the Raptors star during game 3 Wednesday night in Oakland has apologized. 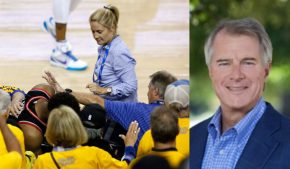 Mark Stevens has issued a statement which reads in part, that he takes full responsibility for his actions and is embarrassed by what transpired. He says what he did was wrong and there is no excuse for it. Stevens goes on to say he has reached out in an attempt to directly apologize to Kyle Lowry.

“A guy like that shouldn’t be a part of our league. That’s just my personal opinion,” Lowry said earlier on Thursday.

Lowry told reporters that to be pushed and cursed at was tough to handle, but he stuck to his high standards and decided not to engage with Stevens.

Mark Stevens has been handed a one year ban and fined half a million dollars by the NBA.