It was a year ago tomorrow, the people of Ontario elected Doug Ford and his Progressive Conservatives to a majority Government. 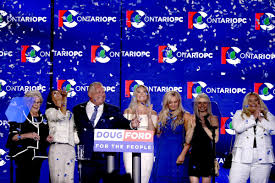 It’s been a busy year.

However, the government had to reverse some of its initial moves.  It backed down on plans for autism funding, the OPP hiring the Premier’s friend Ron Taverner as Commissioner and the proposed cuts to municipal funding.

The legislature rises for the summer break later today and won’t resume sitting until after the federal election in October.