Andrew Scheer says he has removed Michael Cooper from the justice committee over comments the Conservative member of Parliament made earlier in the week. 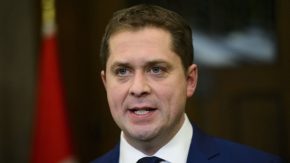 The Tory leader says it was “insensitive and unacceptable” for Cooper to quote the suspected Christchurch shooter to a Muslim witness during a parliamentary hearing.

Cooper has apologized for reading an excerpt from a manifesto written by Brenton Tarrant, accused of killing 51 people at two New Zealand mosques, to the witness.

He says he “quoted the words of a white supremacist anti-Muslim mass murderer in an ill-advised attempt to demonstrate that such acts are not linked to conservatism.”

Cooper says he should not have said those words or named the perpetrator.

Scheer says he told Cooper, who represents St. Albert-Edmonton, that as a consequence of his actions he will no longer sit on the justice committee.

He also says he now considers the matter closed.