RAPTORS MANIA SWEEPS THE NATION AHEAD OF NBA FINALS

It’s here! The day the Toronto Raptors face the Golden State Warriors in game one of the NBA Finals!

The big game, the first in a best of 7, is Thursday night at 9 at Scotiabank Arena, but you can feel Raptors mania right across the country.

33 Cineplex cinemas between Newfoundland and British Columbia will have free screenings of the games.

And in all, Maple Leaf Sports and Entertainment has given approval for free public viewing spaces in 10 Canadian cities. We told you Wednesday about plans in Brampton and Mississauga. Now Pickering residents can visit the Pickering Recreation Complex, which has been dubbed Jurassic East, to watch the games. 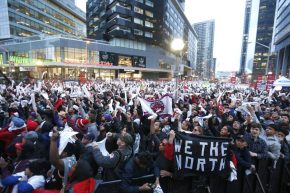 Of course, the biggest viewing party of all is at Jurassic Park, outside ScotiaBank Arena.