MATTISE ON AUCTION TONIGHT IN TO

A masterpiece by French artist Henri Matisse could fetch in the $6 million range when it goes to auction at the Design Exchange tonight in Toronto. 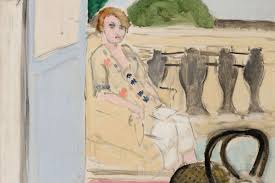 It’s the first Canadian auction of one of the French Master’s major works.

Heffel Fine Art Auction House says the painting was done in the south of France in 1919.  It shows a woman sitting in an armchair on a balcony.

The auction also features works by Canada’s Group of Seven artists with A.Y. Jackson’s “Laurentian Hills” expected to go for upwards of $350-thousand and his work “Red Cedar” is expected to for around $175 thousand dollars. Museum-quality works by Lawren Harris, Emily Carr and other internationally renowned Canadian artists are also on offer.

Heffel says it expects the sale will raise between $15 and $23 million when the bidding starts at 7 pm.