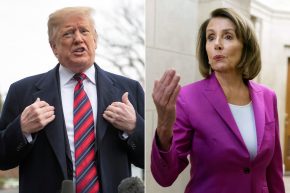 Speaking Monday at a news conference in Tokyo, Trump said “we will work with them,” on what the administration calls the U.S.-Mexico-Canada Agreement, or USMCA.

He added, “I would think Nancy Pelosi would approve that.”

Democrats want the deal to include stronger enforcement provisions, among other possible changes.

Trump headed for Japan after an explosive, multi-day exchange with Pelosi that torpedoed talks about improving the nation’s roads and bridges. Trump promised to do no more work with Democrats until they stop investigating him on questions of obstruction.