CITY GETS SPRING WORK DONE ON THE DVP

The Don Valley Parkway is expected to remain closed until Monday’s morning commute as the city gets its annual spring work done. 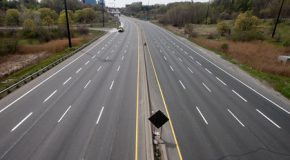 Crews were supposed to get work underway on Saturday but the rain that moved through the area over the course of the day scuppered those plans. Crews are cramming plenty of work into a short window of opportunity.

“We have our paving crews, who are milling about about six lane kilometres of asphalt and we’ll be putting new asphalt down,” said Mark Mills, City of Toronto Manager of Road Operations. “We’ll put down approximately 2,400 tons of asphalt. We’ll be re-doing the lines and a litany of other maintenance work.”

Mills admitted Saturday’s rain means they may not be able to get the entire job done.

They’ve been encouraging crews to get work done as safely and as quickly as possible. That said, at the end of the weekend, they’ll review what they got done and what needs to be done.

Mill said there could still be nighttime closures or even a closure on another weekend to wrap up the work.