Mayor John Tory has repeatedly made it clear he’s not a fan of proposed cuts to cities by the Ontario government. 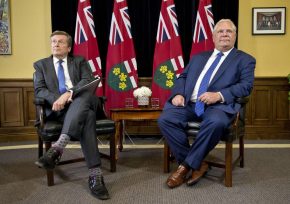 On Saturday, he took his complaints directly to a riding in Toronto currently held by Tory MPPs. Tory was in Eglinton-Lawrence, currently held by Robin Martin. He was joined by Mike Colle, the Ward 8 city councillor as they went door-to-door talking to residents.

“I hope one of them will have the courage, just one, to speak up and say what a lot of them understand and are hearing from their residents,” Tory said of the Tory MPPs in the region. “Speak up and say ‘this is the wrong thing to do this.'”

The city is particularly upset with the province enforcing retroactive cuts after the cities have already approved their budgets from the coming fiscal year.

The province has said time and again that they have difficult decisions to make after inheriting a fiscal mess left by the previous government.