Three in four Ontario residents think Premier Doug Ford and his governing Progressive Conservatives are on the wrong track. And a new Environics Research survey indicates it’s his budget cuts to public health that’s one of the main reasons why. 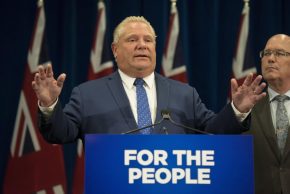 The poll found the Tories’ decision to streamline Ontario’s 35 public health units to 10 and cut $200-million in spending remains controversial. Some 80 percent of respondents say the units are very important to Ontario.

Environics VP Derek Leebosh says it took a few years for the Wynne government to get that high on the wrong track number and even that was at the end of 15 years of the Liberals in power.

The findings echo those in recent surveys by Pollara Strategic Insights and Corbett Communications, which found budget cuts have not been well received.

The findings also echo what happened at a public event last week, when Premier Ford was booed at the opening of the Special Olympics Youth Games in Toronto

Ford continues to say that while his government is finding efficiencies at the provincial level, municipalities must do the same.