This is likely to further increase tensions between Canada and China.

Two Canadians detained in China have been formally arrested on state secrets charges, according to the Chinese government. 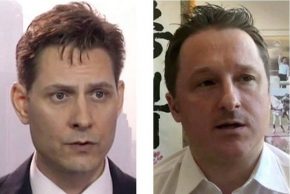 (Michael Kovrig (left) and Michael Spavor, the two Canadians detained in China, are shown in these 2018 images taken from video.)

Michael Kovrig and Michael Spavor were picked up separately in December, shortly after Canadian authorities arrested Huawei CFO Meng Wanzhou, who faces extradition to the U.S.

With their formal arrest, Spavor and Kovrig could soon face trial, although it’s unclear when that might be.