LADY CHATTERLEY'S LOVER STAYS IN THE UK FOR NOW

The battered copy of DH Lawrence’s “Lady Chatterley’s Lover,” used by the judge who presided over the book’s 1960 obscenity trial, won’t be leaving the UK after all. 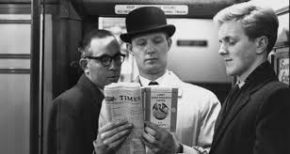 The British government has used its powers to preserve cultural treasures and has postponed its sale to a foreign buyer.

The book was the final novel that Lawrence wrote before his death in 1930. It was about an affair between a wealthy woman and her husband’s gamekeeper.

The 1960 obscenity trial made headlines after publisher Penguin decided to test the British Obscene Publications Act. It was a watershed moment in British cultural history when Victorian ideals were overtaken by a more modern attitude and the book was eventually cleared.

The decision on the export license application will be deferred until August 9th and could be extended to October 9th.