TORONTO PC MPPs SIDE WITH PREMIER IN BUDGET BATTLE WITH CITY

The ten Toronto PC MPPs have declared their alliance, and it’s not with Toronto Mayor John Tory and Toronto City Council, it’s with Premier Doug Ford. 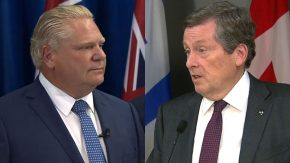 The Toronto Star emailed questions to the Tory MPPs who represent city ridings, other than Ford.

The questions include whether the MPPs are uncomfortable with any of their government’s cuts; pegged by the Toronto city manager at 178 million dollars this year for public health, transit maintenance, child care spaces for low income parents, among other areas.

Mayor John Tory and city councillors are urging the Toronto Tory MPPs to convince Ford and his cabinet to rescind the budget cuts and instead sit down with representatives of Ontario municipalities and explore other ways the province can save money and cut the deficit.

In response, a joint statement from the Toronto PC MPPs was released, saying the government is protecting what matters most for Toronto families (like healthcare and education) by balancing the budget in a reasonable and responsible manner. It goes on to ask the province’s municipal partners to work alongside the government to find efficiencies.