The federal New Democrats are pledging to cut Canada’s emissions almost in half over the next decade which would bring this country in line with what’s recommended by the United Nations.

The pledge is part of a climate change motion the party is expected to bring forward in the House of Commons on Monday. 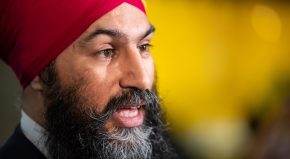 The New Democrats would also eliminate federal aid for the fossil fuel industry and put an end to the Trans Mountain pipeline expansion.