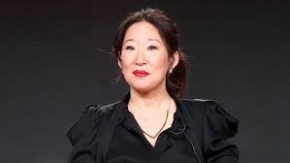 Instead, Oh’s co-star Jodie Comer was named best actress. Fiona Shaw was named best supporting actress for her portrayal of a spy chief in the BBC America series.

Oh, who was born in Ottawa, won a Golden Globe for his work in “Killing Eve.”

Benedict Cumberbatch was named best actor in a drama for playing a man confronting a lifetime of demons in “Patrick Melrose.”

Ben Wishaw was named best supporting actor for his work in the political drama “A Very English Scandal.”