RAPTORS AND 76ERS HEADED FOR GAME 7

It has now come down to a 7th and deciding game. 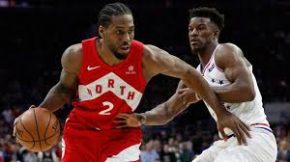 The Toronto Raptors went into Philadelphia and dropped game six to the 76ers 112 – 101.

Kawhi Leonard had 29 points and 12 rebounds to top the Raptors, but went 0-for-4 from the three-point line. Pascal Siakam added 21 points, Kyle Lowry had 13. But Game 6 was reminiscence of Games 2 and 3. No other Raptor scored in double figures.

The Raptors went into the City of Brotherly Love on the heels of a 125-89 thrashing of the Sixers in Toronto Tuesday night which was the largest post-season margin of victory in franchise history.

The now best-of-one series will be decided Sunday night at Scotiabank Arena. Tip off is 7 p.m.