Ontario’s Premier is promising the abortion debate will not be re-opened by his government.

Doug Ford released a statement on Thursday, after a video surfaced of PC MPP Sam Oosterhoff speaking at a pro-life rally and saying that its time to make the termination of pregnancies “unthinkable.” PC MPP Will Bouma also addressed the crowd.

But Ford’s statement does not condemn Oosterhoff’s comments. He does say the PC Party “welcomes members from a wide variety of backgrounds and beliefs.” 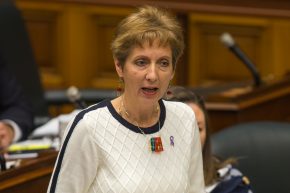 Earlier in the legislature, NDP Health Critic France Gelinas encouraged the premier to take a stand.

“The premier has been less than clear on this issue. He has courted the support of the anti-choice activists and I’m asking him this morning, will he stand here today and say that he refutes his MPP’s comments and supports a woman’s right to choose,” Gelinas questioned.

In response, the premier referred the question to his energy minister, Greg Rickford, who instead spoke about the Tories’ opposition to the federal government’s carbon tax.