Alex Trebek received a standing ovation Sunday night, as he accepted an Emmy Award for Jeopardy! 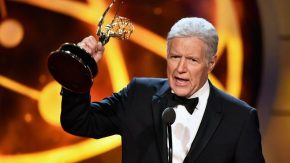 But then he recalled he lost last year, after he had major surgery for life-threatening blood clots.  Since that didn’t get him a sympathy vote, the 78-year-old Trebek jokingly said he could live with this latest honour.