Fifty-six years ago this weekend, Little Peggy March made history with “I Will Follow Him.” 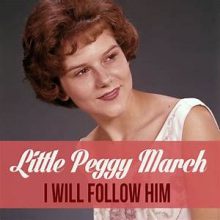 At 15 year of age, Peggy March was the youngest female singer to top the Billboard Hot 100, when “I Will Follow Him” hit number one.  And Peggy, who is now 71 is amazed she still hold the record.

And for the record, she says right from the beginning, she hated being known as “Little Peggy March.”