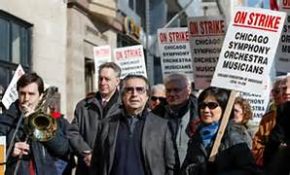 The seven-week long strike by musicians with the Chicago Symphony Orchestra has come to an end.

The strike was the longest in the orchestra’s 128-year history. Members voted to agree to the five-year deal on Saturday. Chicago’s Mayor, Rahm Emmanuel helped to broker the deal between the musicians and their management.

Issues with the musicians’ pension plans was a big sticking point during the strike. But that matter has been resolved with a compromise and the musicians can now get back to playing music.

They next shows are a series of free concerts for for the public that will be held in a number of areas around the city.