We are learning that representatives with the TTC and Bombardier have quietly reached a settlement over the transit agency’s multimillion-dollar claim against the company for Toronto’s notoriously delayed streetcar order. 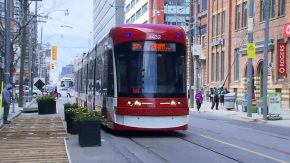 Details of the agreement are not being disclosed, but TTC spokesperson Stuart Green confirms the deal was signed in January. He says the details are confidential in the $1-billion dollar, 204 vehicle contract for delivery by the end of this year.

According to the agreed upon schedule, Bombardier was supposed to have supplied 73 cars by the end of 2015, but reduced that target to just 27 vehicles.

Bombardier has since increased its production output, and as of this week, the TTC has 141 of the cars in service. Green says the TTC remains optimistic Bombardier’s recent improvements have made the year end target achievable.