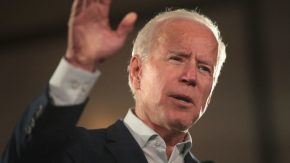 (Former Vice President Joe Biden hasn’t hidden his presidential aspirations since leaving office in 2017, and didn’t appear deterred by accusations of inappropriate contact over the past several weeks either. Scott Olson/Getty Images)

Biden made the announcement in a YouTube video, where he says he wants to take back the soul of this nation from Donald Trump.

He’s probably got the best chance of any Democrat running to win the nomination, but the other candidates combined have a significantly better shot than he does.

Biden has averaged about 28% in the national polls over the last month and about 30% since the beginning of the year.

Looking back at polling since 1972, well-known candidates who average 30% in the first half of the year before the primary win their primaries about 40% of the time.

One way you can know Biden’s advantage is not just about name recognition is to look at the early states where voters should be paying the most attention. Over the first 4.5+ months of 2019, Biden’s averaged 26% in Iowa, 24% in New Hampshire (where he is fighting against Sens. Bernie Sanders and Elizabeth Warren, who represent next-door states), 26% in Nevada and 36% in South Carolina. Across all four, he’s averaged 28% since the beginning of the year.

Biden’s fairly strong horse-race numbers are backed up by having the best favorability ratings in the Democratic field. And keep in mind, he’s also polling better than Sanders or Warren, who have similarly high name recognition.