RAPTORS MOVE ON TO FACE THE 76ERS, LEAFS END THEIR SEASON IN BOSTON

It was a heart breaking loss for the Toronto Maple Leafs in Boston, 5-1 in game 7 to end their short playoff run.

The Bruins have now defeated the Leafs in Game 7 in the opening round of the playoffs three of the last seven seasons, with each clincher coming at TD Garden.

Boston also took down Toronto 7-4 last spring, becoming the first team in NHL history to battle back from three deficits of at least one goal to win a Game 7 in regulation. That came five years after the Bruins’ 5-4 overtime victory in 2013 the first time a team had won a Game 7 after trailing by three goals in the third period.

The crushing result for the Leafs means more heartbreak for a franchise that has failed to advance to the second round of the playoffs since 2004 and has not won the Stanley Cup since 1967.

It was a much more positive outcome for the Toronto Raptors. 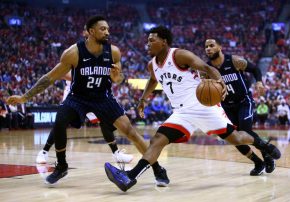 The Raps dispatched the Orlando Magic in record time, checking the first box of what the team hopes is a long playoff run.

Toronto will face Philadelphia in the next round after the 76ers bounced the Brooklyn Nets from the post-season in five games.

Pascal Siakam scored 24 points for the Raptors, who led by as many as 37 points in the dying minutes. Kyle Lowry had 12 of his 14 points in the first quarter and doled out nine assists, Norman Powell chipped in with 11 points and Serge Ibaka finished with 10.