The flooding situation in Bracebridge has gone from bad to worse. 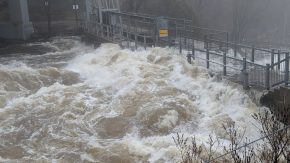 (Water over Bracebridge Falls on April 21, 2019. A state of emergency is now in place. Image credit: TWITTER/@GraydonTheMayor)

That town’s mayor has declared an emergency under the Emergency Management and Civil Protection Act.

There has been a number of roads flooded and washed out, and Public Works is said to be responding to these issues on a priority bases.

There has also been significant flooding in Huntsville.

Hundreds of Canadian troops have been deployed to Quebec and New Brunswick to assist with flood relief.

As of yesterday, about 2800 homes had been struck by flooding while more than 1400 people had been forced out of their homes.