It’s the first anniversary of the horrific van attack along Yonge Street, when on April 23rd of last year, 10 people were killed and 16 injured. 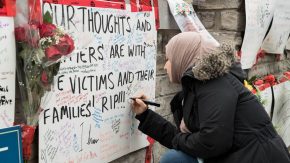 Ceremonies are planned on Tuesday during the day and evening at both Mel Lastman Square and Olive Square in North York to honour the victims.

Temporary signs are being installed along Yonge Street south of Finch Avenue to commemorate the Yonge Street Tragedy until permanent memorials are erected. And Mayor John Tory says the city will stage an event in the coming weeks to honour the first responders and members of the public who helped victims in the minutes after the attack.

Both the mayor and Toronto Police Chief Mark Saunders are making the rounds today, offering their wishes and thoughts for the people of Toronto.

“Let’s keep healing the city,” said Tory, “and let’s keep the city the way it is, especially staying away from division and polarization and the kind of thinking that can lead to sometimes events like this.”

“Don’t let fear dictate how you act, how you live in this city,” said Chief Saunders, “It is the safest urban city in North America and it’s because of the citizens of Toronto.”

The suspect in the attack is set to face trial in February on 10 charges of first-degree murder and 16 of attempted murder.