The people of Ukraine will have a television comedian as their next president. 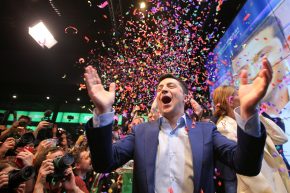 With nearly all votes counted from Sunday’s presidential runoff election in Ukraine, sitcom star Volodymyr Zelenskiy has 73 per cent of the ballots.

Five-year President Petro Poroshenko is trailing far behind at 25 per cent.

Zelenskiy has pledged to unify Ukraine, which has been torn by bitter debates over its identity as well as the Russian led conflict in Eastern Ukraine.

He recently starred in a TV series in which he played a history teacher who is elected president after his rant about government corruption goes viral.

Prime Minister Justin Trudeau issued his congratulations to Volodymyr Zelenskiy on Twitter, saying “I’m looking forward to working with you to continue strengthening the ties between Canada and Ukraine, and creating more opportunities for people in both our countries.”

Trudeau also tweeted his thanks “to the Canadians who are observers in the presidential elections in Ukraine – your commitment and hard work are important in supporting Ukrainian democracy.”