IT'S CRUNCH TIME FOR CANDIDATES IN TUESDAY'S ALBERTA PROVINCIAL ELECTION

Alberta’s political front runners have one more full day of campaigning ahead of tomorrow’s provincial election. 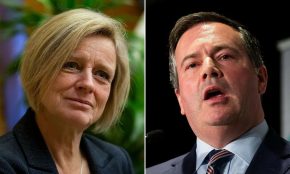 “So it’s really feeling good on the ground, and we’re certainly seeing that there’s a lot of volatility, a lot of movement, and we’re hopeful the momentum is coming our way,” said Rachel Notley during weekend campaigning.

The NDP Leader could make history as the first Alberta New Democrat premier to win re-election, while a win for Jason Kenney’s United Conservatives would mean a return to the right-centre for Alberta.

Notley has run on her record of building Alberta through the lean times of low oil prices, while assaulting Kenney’s character over past statements against abortion and same-sex marriage, and his current pledge to roll back some protections for gay students in schools.

Kenney honed in on the NDP government’s spending and often referred to a “Notley-Trudeau alliance” which he says has punished Alberta’s oil-and-gas sector.