Gas station operators who don’t display government-mandated stickers about the price of the federal carbon tax are facing fines of up to $10,000 per day under new provincial legislation. 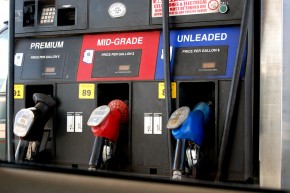 The legislation called the Federal Carbon Tax Transparency Act is contained within the Ford government’s first budget tabled on Thursday and would require all gas stations to display the sticker on each and every pump.

The sticker shows the carbon tax adding 4.4 cents per litre to the price of gas currently, rising to 11 cents a litre in 2022.

The federal carbon pricing system was imposed upon Ontario and three other provinces who’s governments chose not to put their own pricing systems in place.

Premier Doug Ford is a vehement opponent of the tax and a court challenge brought against the federal government by the Ford government over the tax is set to be heard next week.