The haunting image of a little girl crying helplessly as she and her mother are taken into custody by US border officials, has won the prestigious World Press Photo Award. 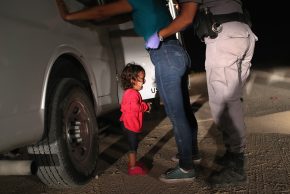 The picture was taken by Getty photographer John Moore after Honduran mother Sandra Sanchez and her daughter Yanela illegally crossed the US-Mexico border last year. The judges ruled the picture showed a different kind of violence that is “psychological.”

The picture was published worldwide and caused a public outcry about the Trump Administration’s controversial policy of separating thousands of migrants and their children.