Benjamin Netanyahu has declared victory to his supporters, as he appears headed toward an historic fifth term as Israel’s prime minister. 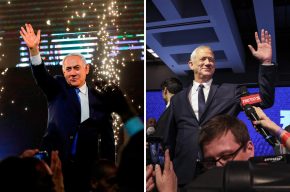 Close-to-complete unofficial election results give Netanyahu and his right-wing Likud, and other nationalist and religious parties, a solid majority in parliament.

The outcome affirmed Israel’s continued move to the right and further dimmed hopes of a negotiated solution to the Israeli-Palestinian conflict.

Re-election will also give Netanyahu an important boost as he braces for the likelihood of criminal charges in a series of corruption scandals.