An 11-second clip of the Beatles’ only live appearance from a 1966 edition of British TV Show “Top of the Pops” has been discovered. 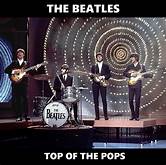 It was feared the clip was lost forever. It surfaced in the possession of a collector in Mexico.

It shows the Fab Four lip-syncing to “Paperback Writer.”

The original tapes weren’t kept, but the snipped was shot by a viewer with an 8mm camera.

The rediscovered clip will be screened at the British Film Institute’s “Music Believed Wiped Programme” later this month in London.