MORE HARDWARE FOR 'COME FROM AWAY'

The Canadian smash Broadway hit “Come from Away” has garnered another set of prizes; this time taking four trophies at the British Theatre’s Olivier Awards last night in London. 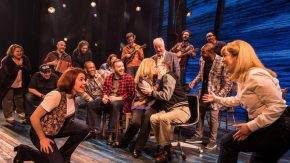 “Come From Away,” inspired by the people of Gander, Newfoundland who sheltered thousands of stranded airline passengers after the 9/11 attacks, was named the West End’s best new musical and also took trophies for sound, outstanding achievement in music, and choreography.

Choreographer Kelly Devine dedicated the award in her category to the people of Gander who she says “in real life, effortlessly showed the world how easy it is to be kind.”

The Toronto production of “Come From Away” is at Toronto’s Elgin Theatre through August. It is still packing them in on Broadway.