Ukraine’s presidential candidates have taken alcohol and drug tests before a runoff vote. 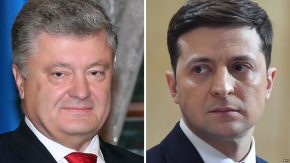 Volodymyr Zelenskiy, a popular comedian who left President Petro Poroshenko far behind in Sunday’s first round, had challenged the incumbent to take the test.

Poroshenko took the test Friday at Kyiv Olimpiyskiy Stadium, the country’s biggest arena where the two rivals are set to have their debate two days before the April 21st runoff.

Zelenskiy took the test at another lab, saying he doesn’t trust the one at the sports arena.

Zelenskiy, who stars in a TV series about a teacher who becomes president after a video of him denouncing corruption goes viral, has made the fight against corruption the focus of his campaign. He won 30 percent of Sunday’s vote, while Poroshenko received 16 percent.