'PAINT BY NUMBERS' CREATOR DIES AT 93

The man who created the first paint-by-numbers pictures that many Zoomers grew up with in the ’50’s has died. 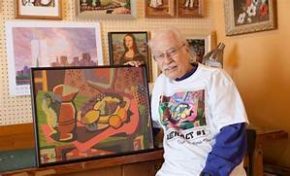 Dan Robbins came up with the idea for paint-by-numbers in the 1940s while working for a paint company in Detroit.  He’d heard that Leonardo de Vinci used numbered backgrounds when teaching his students and decided to give it a try.

The works were initially dismissed by some critics, but were later celebrated and enshrined in the Smithsonian Institution’s National Museum of American History.