“I firmly believe it is time now to make the pilot project permanent as the report recommends, so that we can further built up and improve King Street into the excellent dedicated transit corridor that our city needs and a continuing destination for people who are working or playing or visiting in the City of Toronto,” John Tory said as he made the announcement Tuesday morning while standing at the corner of King Street West and Charlotte Street, which is east of Spadina Avenue. 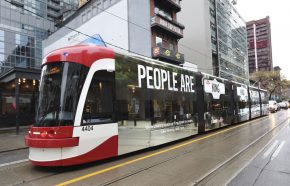 The mayor explained that 84,000 riders now take the King streetcar on an average weekday, up from 72,000 before the pilot began in November 2017.

Tory also acknowledged the concerns of restaurant owners on King Street, who’ve complained their business has dropped as result of the King pilot project.

But Tory says based on a city staff report, the decrease in restaurant profits on King West is only 1.2 percent and continues to recover. He also says retail sales on King have actually increased during the pilot.

The mayor says he will endorse the permanence of the King Street Pilot next week at his executive committee meeting, and then later at full Toronto City Council.

Since November 2017, streetcars on King between Bathurst and Jarvis Streets have been given the priority while vehicular traffic in that stretch is forced to turn right at every major intersection. There is also no parking on King Street in this stretch.