Canadian funny man Jim Carrey is no stranger to ruffling feathers with his art work. 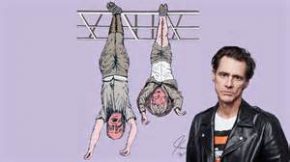 Now, a cartoon Carrey has drawn is of former Italian dictator Benito Mussolini and his mistress, has drawn flack from Mussolini’s granddaughter Alessandra. She is a member of the Italian Parliament and called him a name that suggests Carrey’s parents were unmarried.

The cartoon in question depicts Mussolini hanging upside down after he and his mistress were executed. It bears the caption, “If you’re wondering what Fascism leads to, just ask Benito Mussolini and his mistress.”