Toronto Mayor John Tory has pledged to lower speed limits and crack down on scofflaw motorists in an effort to cut down on the number of pedestrian and cyclist fatalities in the city. 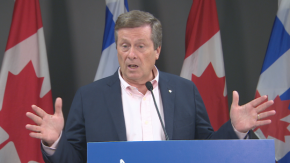 Safety advocates have criticized city officials for dragging their feet on safety measures to avoid any further disadvantage to harried motorists already struggling with choked roads and gridlock.

In one case, a driver was found doing 127 kilometres an hour on part of the key Queen Street thoroughfare that has a 40-kilometre speed limit.

The mayor said the city would be pushing provincial regulators and its own staff to ensure that speed cameras are deployed in school and community safety zones across the city by September.

Tory also called for lowering the speed limit on arterial roads across the city although he did not specify what he thought the limit should be as well as more mid-block crossings.