Sunday’s Ethiopian Airlines is disaster is raising concerns about the specific aircraft involved. 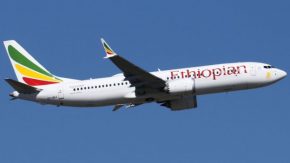 It was a Boeing 737 Max 8 jet that went down yesterday, killing all 157 people on board, including 18 Canadians.

Since then, Ethiopian Airlines has grounded the rest of their Max 8 planes as a safety precaution, as have China and Indonesia.

The plane is used by both WestJet and Air Canada as well as a number of American airlines, and it was the same type of plane that crashed in Indonesia this past October.

Danielle Moore, who grew up in Scarborough, was among the victims.

The 24 year old posted on Facebook on Saturday morning that she would be travelling to Nairobi, Kenya, for the United Nations Environment Assembly.

Pius Adesanmi was considered a towering figure in African and post-colonial scholarship. He was a professor at Carleton University in Ottawa.

Derick Lwugi was an accountant with the City of Calgary and was on his way to Kenya to visit both his and his wife’s parents.

And Peter DeMarsh of New Brunswick was also killed in the plane crash.