Ethiopian Airlines says it has contacted the families of the victims of a plane crash Sunday that killed 157 people, including 18 Canadians. 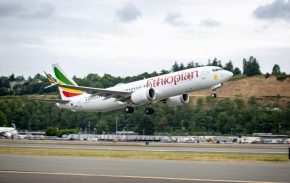 The airline says it will soon conduct forensic investigations to identify the 149 passengers and eight crew who died when a Boeing 737-8 MAX went down shortly after departing from Bole Airport in Ethiopia’s capital Addis Ababa en route to Nairobi, Kenya.

Prime Minister Justin Trudeau called the news devastating and said his thoughts are with all the victims and everyone who lost friends, family or loved ones.

Ethiopian Airlines issued a list showing 35 nationalities among the dead, including 32 Kenyans and 18 Canadians.

It was not clear what caused the plane to go down in clear weather, but the accident was strikingly similar to last year’s crash of a Lion Air jet that plunged into the Java Sea, killing 189 people.

Worried families gathered at the flight’s destination, the airport in Nairobi, the capital of neighbouring Kenya, and some relatives were frustrated by the lack of information about loved ones.