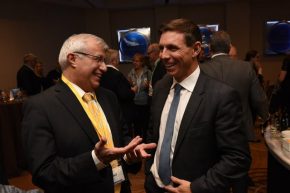 Patrick Flaherty says it was a day that Brown and his publisher knew that Fedeli would be required to give multiple media interviews and would be confronted with the allegations in the book.

A statement of claim says “Fedeli has been exposed to hatred, ridicule and contempt, including on social media such as Twitter, and has suffered, and will continue to suffer, damage to his feelings and reputation.”

When he joined Zoomer Radio’s Fight Back with Libby Znaimer on the release of his memoir, Patrick Brown explained that he knew personally of the allegations against Vic Fedeli.

“I was privy to the lawyer’s letter that was sent by the individual, that it was very hypocritical based on what Vic Fedeli was saying at the time and how someone in the midst of this could be saying such disingenuous things like ‘I always believe the woman’, and clearly that wasn’t the case in allegations against yourself (Vic Fedeli).”

Brown is suing CTV News for $8-million in a separate defamation action over allegations of sexual misconduct that prompted Brown to resign as Progressive Conservative leader.

Brown has denied the allegations. CTV stands by its reporting.