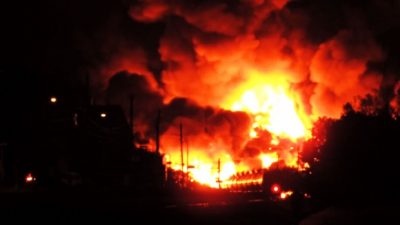 Netflix is apologizing to the people of Lac Megantic – after actual footage of the 2013 rail disaster that devastated the town was used in dramas on the streaming service.

The company says it had not been aware of the source of the footage used briefly in the hit movie Bird Box and the series Travelers. The images show the explosion that killed 47 people when an oil-laden train derailed in the middle of downtown.

In a letter dated Monday to Quebec Culture Minister Nathalie Roy, the streaming giant says it regrets causing pain to the community of Lac Megantic.

The letter is signed by Corie Wright, Netflix Inc. director of public policy – and promises to avoid future use of it and similar footage.

Roy wrote to Netflix CEO Reed Hastings last Friday asking that the footage be removed from the dramatic productions – and used only in documentaries.

Netflix has refused to remove the footage from Bird Box – despite the appeal from Roy and Lac-Megantic’s mayor. The producers of  Travelers have said they are working replace the LacMegantic images in their show.