General Motors workers in Oshawa stopped production for about an hour Wednesday morning in protest against GM’s decision not to consider any union proposals to keep their plant open after this year. 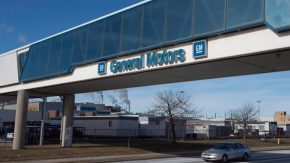 General Motors Canada spokesperson David Patterson says the automaker is not giving up on Canada.

“We also produce here and will continue to produce here after the Oshawa situation,” Patterson said, “We have a big plant in Ingersoll. It makes the Chevrolet Equinox. We’ll produce nearly the same amount of vehicles as we sell in Canada.”

General Motors received nearly $11-billion dollars of Canadian taxpayer dollars as a bailout in the 2009 recession.