FORD TORIES CAN TAKE OVER SUBWAY WITHOUT OFFERING COMPENSATION TO TORONTO: LEGAL OPINION 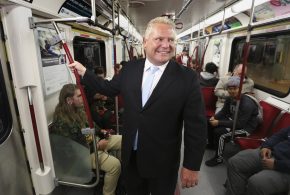 A confidential council report detailed in the Toronto Star reveals that Premier Doug Ford’s government has the legal authority to unilaterally take over the TTC subway system without offering the city as much as a cent in compensation.

The legal opinion provides advice to councillors ahead of a key council vote on the proposal expected Thursday. It also says by law the province could even completely dissolve the TTC.

Council is expected to vote on whether to authorize the city manager to begin talks with the Ford government about the upload.

The Ontario PC’s say the province is best equipped to efficiently finance new lines and create a seamless transit network across municipal boundaries.

Transit advocates warn the PCs would privatize work on the subway, sell off its assets and extend lines to the party’s political base in the suburbs at the expense of the badly needed downtown relief line.