It turns out activities such as crossword puzzles and Sudoku do not appear to protect against mental decline as we age. 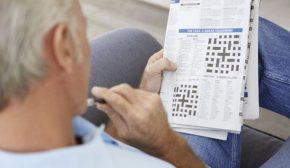 A new study out of Scotland does show that people who regularly do intellectual activities throughout life have higher mental abilities, but according to researchers, that just provides a “higher cognitive point” from which to decline.

The work, published in the British Medical Journal, was done through the University of Aberdeen.

Researchers looked at nearly 500 people born in 1936 who had taken part in a group intelligence test at the age of 11.

The current study started when members of the group reached the age of 64. Scientists found that engagement in problem solving did not protect an individual from decline.

Some previous studies found that cognitive training can improve some aspects of memory and thinking, particularly for people who are middle-aged or older. But, no studies have determined that brain training prevents dementia.