Haligonians are gathering today to remember the many lives lost in what remains one of the worst human-made disasters in Canadian history. 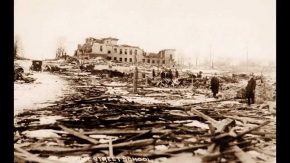 Thursday marks the 101st anniversary of the Halifax Explosion, when two wartime ships collided in the harbour and sparked a massive blast that claimed almost two-thousand lives and obliterated a section of the city.

A moment of silence was held at Fort Needham Memorial Park at 9:04 a.m., the exact time of the explosion on December 6th, 1917.

The memorial bells also rang out at the service in the city’s north end, which was destroyed as a fiery shock wave rolled up from the harbour.

Author Janet Kitz, who has written extensively on the explosion, says it has been years since she has heard from any survivors.

She says they were once a critical part of educating younger generations about the event, but have been dying off in recent years.

Museum curator Dan Conlin, a leading expert on the explosion, says reflections on the experience will differ because of their loss.

But he expects the stories will live on through the survivors’ families who are keen to share them.