The City of Toronto and Friends and Families for Safe Streets, is set to launch a new Vision Zero road safety awareness campaign. 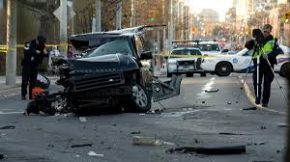 The General manager of Transportation Services, Barbara Gray and representatives from the safety group have called a media event for 10:30 a.m. at King and Spadina.

Toronto Mayor John Tory originally launched the Vision Zero  program in January of 2017 with a goal of zero road fatalies by 2021.