The search continues in the U.S. for the person or people behind the mail-bomb plot aimed at Democrats and their supporters. 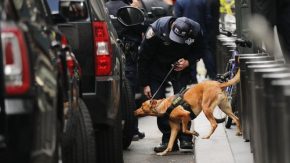 FBI Investigators are also analyzing the ten crude devices to reveal whether they were intended to detonate or simply sow fear two weeks before Mid-term Election Day.

Our security expert Ross McLean told Zoomer Radio’s Fight Back with Libby Znaimer, these bombs would never have reached the intended targets.

“Whenever you send a package that’s going to a Secret Service protected person, it will never get to that person without being searched checked and looked at offsite. So the person who went to all this trouble either didn’t know that that happens or knew that that happened and really designed them in away that they would all be discovered in essence creating a bomb-threat scare, more so than a bomb,” McLean explained.

McLean also suggests there will be a quick arrest in this case. Listen to the full conversation with Ross McLean here.

There are also reports suggesting the devices were not rigged like a booby-trapped package bomb that would explode upon opening.

The targets included former U.S. president Barack Obama, and former vice president Joe Biden, who is now speaking out after the interception of two suspicious packages that were addressed to him.

“We’ve got to turn off this hate machine, we’ve got to come together,” implored Biden.

Canada’s foreign affairs minister is speaking out in response to U.S. President Donald Trump’s latest criticism aimed at the media, saying journalists are the real cause of the anger in society.

A former journalist herself, Chrystia Freeland says politicians have a responsibility to be very clear that a free press is a crucial part of democracy.