We’re hearing directly from Michael Bublé that he has no plans to retire from music. 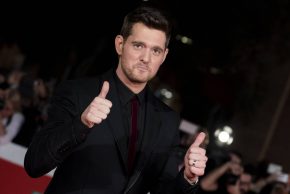 The 43 year old internationally renowned Canadian crooner is denying reports that he’s going to retire from music after he releases his Love album in November.

Bublé tells The Associated Press he was misquoted in an October 13th interview in London’s Daily Mail tabloid.

“I’ll keep going until the news of my death comes up, which will probably be fake too,” Bublé joked.

“As long as I can continue to have joy and bring joy, and for my journey to be a happy one, that’s it,” Bublé went on.

Bublé says when friends texted him the story, he told them to consider the source and instead asked them to share pictures of their kids.

Michael Bublé stepped away from entertaining for two years to focus on his son Noah’s cancer diagnosis and treatment. He and his wife Luisana Lopilato shared the news that Noah was cancer free in April of 2017.